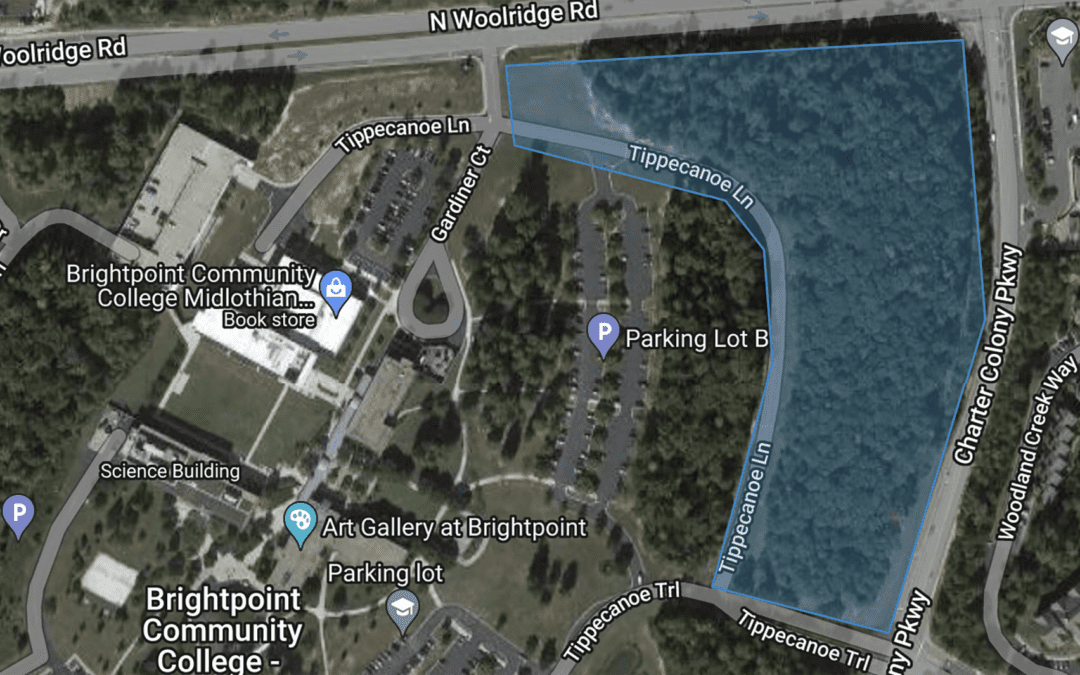 Brightpoint Community College is trying to add some extra life to its Midlothian campus by carving out some acreage for a mixed-use development.

Formerly known as John Tyler Community College, the school is teaming with Virginia Beach-based developer Boyd Homes for a project that features 245 apartments and 10,000 square feet of commercial space.

The development is called Marcella at Charter Colony and would rise on 11 acres of wooded land next to the college’s campus at 800 Charter Colony Parkway, according to a conceptual plan filed with Chesterfield County.

The development would consist of seven apartment buildings and an additional, separate commercial building, according to the plan. The apartments would feature a pool and clubhouse, and the plan shows that there would be road connections between campus and the development.

The project is a public-private partnership in which Brightpoint collects rent from Boyd Homes, which has a sublease on the project site and would build the development.

The project is expected to be the first major effort by the college’s real estate foundation, which was formed in 2015.

Assuming county approvals, the project is expected to break ground in the late summer or early fall of next year, according to Brightpoint Governmental and Administrative Services Director Fred Taylor.

“We think there are students and staff who will end up living in those apartments because it is close by,” he said.

Taylor said Brightpoint sees the project as a way to enliven the campus with amenities by way of the commercial piece, which would be leased by restaurants and the like, and as a means to effectively bring a housing option to campus. Neither Brightpoint campus (the other one is in Chester at 13101 Route 1, previously Jefferson Davis Highway) has on-campus housing.

“It’s to maximize the land we have and provide opportunities for students, faculty and staff to live basically on campus,” Taylor said.

The college chose this route rather than pursue construction of an official residence hall to avoid the administrative challenges that come with such facilities.

“When you get into dorms, you’re talking about a lot of services you have to provide to students and they would only be open to students. You have student life, health, security, all those things you’d be responsible for,” Taylor said.

He said the buildings’ design is expected to mimic the style of the facilities at Brightpoint’s Midlothian campus.

Boyd Homes inked a ground lease for the project area with the college’s real estate foundation in June, according to documents filed with the county. Brightpoint leases the land from the state community college system, which owns the land where the Midlothian campus is situated. The development’s site would be split off from the overall, 117-acre campus.

Boyd Homes is pursuing a rezoning request for the project, which would need approval by the county’s Board of Supervisors before construction could commence. The Planning Commission will review the proposal first. A date for that hearing hadn’t been publicized by Chesterfield as of Wednesday.

Taylor said the zoning application for the project was filed about a month ago. Jeff Geiger of Hirschler Fleischer is representing Boyd Homes in its request.

The project is a resurrection of sorts of an effort by Brightpoint about eight years ago to build a retail center at the Midlothian campus.

Though there were discussions with Chesterfield staff about that proposal, Taylor said Brightpoint ultimately didn’t put forward a formal proposal. The residential piece is new this time around.

A public-private development project like this one is new ground for Brightpoint, Taylor said. It would also appear to be a first for the state’s community college system, which consists of 23 schools.

“This partnership is a first-of-its-kind effort by the Virginia Community College System, and Brightpoint hopes this public-private partnership will be a model for other community college campuses in the Commonwealth,” Brightpoint Real Estate Foundation President William Talley wrote in an October letter to the county.